How Much Electricity Does A Solar Panel Produce? Everything You Need To Know 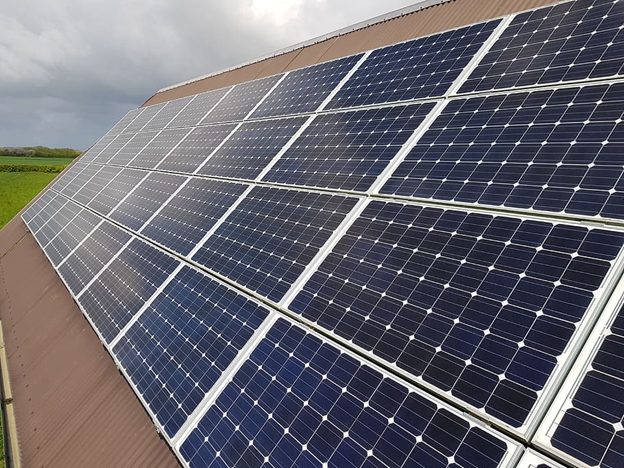 Energy that a solar panel produce

Every solar panel is rated to produce a certain number of watts (W) of power at peak sunlight. For example, a 100W solar panel will theoretically provide 100W of power when the sun is shining directly on it.

However, in real life conditions this rarely happens and a more realistic approach would be to estimate that 75% of its capacity can be expected when optimally angled towards the sun in ideal weather conditions. This means that a 12V 100W panel will have an actual output of about 8.4 amps at 12 Volts or 96 Watts in real world use.

Why are larger panels more useful?

In addition, larger panels are more efficient than smaller ones so if you had two 50W panels instead they may collectively add up to 75% efficiency when placed side by side. The number of watts produced by a solar panel is dependent on the amount of sunlight that hits it, the more sun, the more watts are generated.

The power output of a solar panel decreases when there is less available light e.g. at night or if it’s cloudy outside. This change in power output over time is referred to as “solar insolation”. When you purchase a 100W solar panel, most manufacturers will give maximum and minimum values for sunlight intensity (insolation) and most people will live somewhere where sunshine falls between these two numbers most of the time.

Solar panels produce direct current (DC). If they are connected together in series their voltages add up but their currents remain unchanged. Most solar panels require a bit of wiring so that they can be connected to your household power. The standard wire size for 12V panels is 10 AWG, but this will depend on the thickness of your cable.

A 100W solar panel produces about 1 kWh per day during peak sunlight in summer, whereas something like 40-50 W might be more realistic during winter months where daylight times are shorter. On average 1 hour of full sun provides approximately 1 kWh/m^2.

Maximum energy that a solar panel can produce

The amount of electricity produced is as a result proportional to the surface area exposed to light. This means that larger solar panels will produce more electricity than smaller ones at the same intensity of sunlight.

As an example, if two identical panels were exposed to sunlight from perpendicular directions and one panel was twice as large as the other then it would be possible for the large panel to produce up to 4 times as much electricity as a small panel.

Of course this ratio can change with changes in climate so you have to take into account factors such as cloud cover and temperature which affect how much power a solar panel can provide.

Solar panels are often built up from wafers of silicon that are formed into large circular shapes before being sliced into individual solar cells. The surface area of each cell determines how many photons strike it and thus the total power that will be produced, so it is necessary to increase the surface area by increasing its size or reducing its thickness.

You can compare this with a large billboard that appears bright even though it only has a single candle behind it because all of the light is concentrated on a small area. The same thing happens with sunlight reflected off components in photovoltaic devices, even if they are constructed out of materials transparent to visible light.

For example, organometallic halide perovskites are both cheaper to produce and more efficient at converting sunlight into electricity than silicon but their efficiency suffers due to optical losses due to reflection from metal.

A key word to know with respect to solar panels is “paralleling” which refers to connecting multiple photovoltaic devices together electrically so they function as though they are one unit even if they are not physically connected. If you were building an off grid solar installation with a battery bank for storage you would want to choice solar panels that have a high voltage output.

If you were building an on grid installation where electricity was being fed into the public grid system, then the voltage of the panels tends not to matter as much and characteristics such as efficiency become more important.

Yes, it is a great idea to use solar panel in house. By this you can save electricity.

Share. Facebook Twitter Pinterest LinkedIn Tumblr WhatsApp Email
Previous ArticleInsulation or basement ceiling: Each And Everything You Need To Know
Next Article What Are The Uses Of Air Conditioner In Basement? How Can We Set Up The AC In Basement?