GST Rule and Its Effect on Domestic Cooking Gas 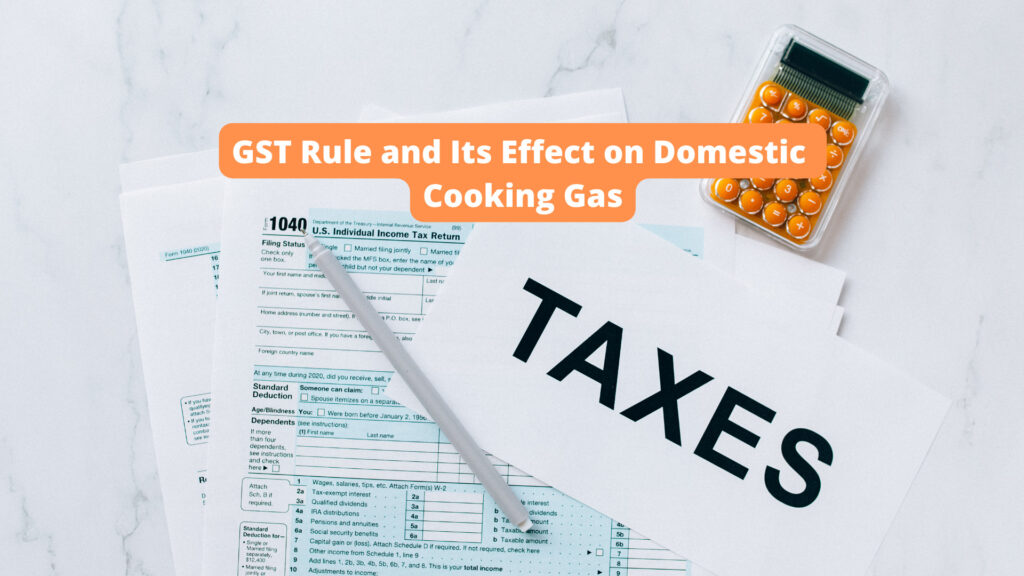 GST (Goods and services taxes) is an indirect tax system in India used for the supply of goods or services. It came into existence in India in the year 2017 through a constitutional amendment by the government of India. However, the idea of GST originated many years back during the time of prime minister Atal Bihari Vajpayee in 2006 and finally, the bill was passed in 2015. The different GST slab rates are slabs for the collection of tax: 0%, 5%, 12%, 18%, and 28%. Initially, petroleum products as well as alcohol are kept out of GST. The GST Council has decided to impose one uniform tax across states, to simplify administration and cut down on corruption. GST council is the governing body for GST and comprises 33 members (2 central and 28 state + 3 union territories). The chairman of the GST council is the Union Finance Minister of India. The new law will also make it easier for businesses to file returns online while ensuring they don’t face additional paperwork or compliance costs.

1. GST is implemented at every step of the production process from 1 July 2017; however, it is refunded to all parties later except the final consumer.

2. GST is applied as per the slabs described above.

3. GST is collected at the point of consumption, unlike previous taxes.

4. The rate, rules, and regulations are made by the GST council.

5. Revenue earned from GST is shared by both the central and state governments at 50% each.

The retail price of a domestic cooking cylinder that the consumer has to bear depends on a variety of factors- ‘Market Determined Price’, ‘Distributor Commission’, and ‘GST’. The introduction of the new GST is not good news for those who use domestic cooking gas cylinders for their homes. According to GST regulations, domestic cylinder prices are expected to rise by around Rs.32 per cylinder. The increase in cooking gas prices in India is mainly due to two reasons. First, due to the introduction of the new tax system called GST, and second, due to reduced subsidies. Moreover, domestic LPG cylinder growth will vary depending on the state in which the consumer resides. The ‘market-determined factor’ depends on location, uncompensated cost, etc.

Meanwhile, in recent news, it was expressed that public sector oil marketing companies have decided to cut the prices of LPG which might decrease the price of the LPG cylinder booking. While the reduction in rate is mostly for commercial cylinders in various states, no relief is there for domestic LPG cylinders. The domestic cylinder price for a 14.2 kg cylinder in Delhi and Mumbai is Rs. 1003, for Kolkata is Rs.1029 and for Chennai is Rs.1019.  In the last year, the price of the domestic cylinder in Delhi has increased from Rs. 834 to Rs 1003.

Thus, LPG gas booking has gone costlier for domestic consumers after the introduction of the Goods and services tax. The majority of middle-class Indian citizens were not happy with the rise in prices of domestic cooking cylinders. People were also affected when the subsidy rate was slashed for domestic LPG. The double impact of GST and reduction in subsidy has hurt the Indians. However, the slight reduction in commercial LPG prices that are used in restaurants, hotels or other industries has kept the prices of things from those industries at check. The introduction of GST has been criticized by Indian businessmen and consumers from time to time due to the complex or new system of return filing, and the sudden increase in prices of essential commodities. GST has decreased the travel time in interstate movement by 20% for goods across the states, which is a beneficial effect of GST.

Read also: What is AC Power Consumption and How to Calculate it?